Depending on your delivery address, VAT may vary at Checkout. More information

The new Halcyon Adventurer Plus  wing system is a light-weight single tank BC based around the Traveler Pro version of the popular Eclipse wing and a special design carbon fiber backplate which does not require a separate single tank adapter.

Both the carbon fiber backplate and wing have webbing slots, allowing the direct use of supplied cambands (with Octogrips) around a cylinder. The backplate itself is shaped to fit snugly against a cylinder eliminating the need for a separate adapter. The specially designed waist level webbing slots allow easy adjustment of the harness length/size while on or off the diver, letting the webbing "roll" through to desired tightness, similar to the functionality of the previous Cinch system. This design reduces overall weight of the system and makes it travel friendly.*

The whole system includes a Traveler Pro Wing 40 lbs. (18 kgs.), the special design CF backplate complete with standard single loop harness and all hardwear, an MC Storage Pack for backplate and an intergrated two-pocket weight system. Also included are two tankbands with stainless steel buckles and a lamp tank holder that can be mounted instead of the right-hand lead pocket.

The Halcyon Traveler Pro  is a donut shaped back-mounted Buoyancy Compensator (BC) allowing divers to enjoy perfect horizontal trim underwater. It is suitable for single tank divers from any agency and at all levels.

The inner (2nd) bladder of the wing is easily accessible via a zipper which in normal use faces the backplate.

The low drag design of the wing spreads the air in a balanced way on back of the diver, keeping the BC part of the compensator out of the way and offering unprecedented streamlining during a dive. The wing has a narrow elliptic shape which more or less matches the divers width.

There are no air-inflated side panels or pockets as on traditional 'jacket type' BC's, avoiding a "legs down" position often caused by air to the side and front of the diver. There are no restrictions on the diver's chest - making it extremely comfortable, with no chest compression, also allowing one size to fit all with no hassle.

Advantages of a wing system over a "jacket type" BC are numerous. The Halcyon system depends on a one piece webbing harness looped through a sturdy backplate that should last many life times. Once donned, a webbing crotch strap (included) can be utilised to keep the whole system in place with minimum movement.

This clutter-free system is easily adjustable to suit any size (one size fits all!), any type of diving and any thickness of suit/undersuit a diver may be using.

No customer reviews for the moment. 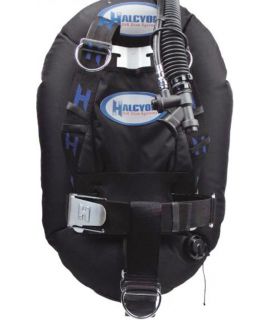 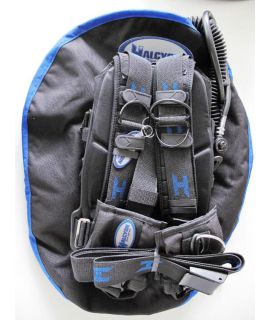 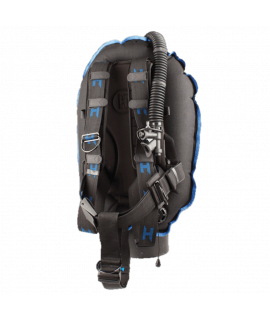 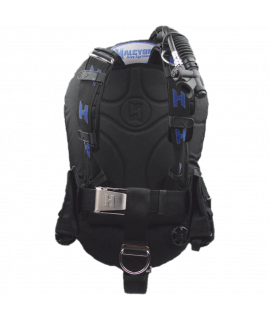 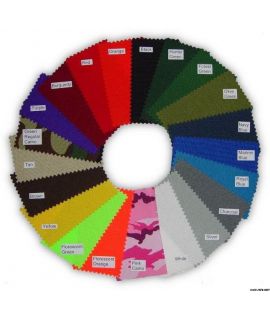 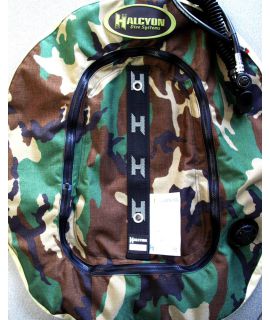