The legendary HESER Backuplight now also in the "Short Version"

Second Edition: The version "II. Edition" has a luminous flux in the range of min 200 lm with two batteries. The LED head is also pressure-tight up to 20 bar. This increases safety considerably, as the lamp head continues to function safely even when the lamp is flooded.

Due to the relative high light output the Heser-BackUp is also applicable as main lamp. This torch runs by standard batteries “baby C”. Depending on quality of batteries, you can do up to 6 hours and longer night dives. You will enjoy following advantages:

Through the use of a very powerful 4W LED, this lamp has an enormous luminous efficacy in comparison to halogen lamps of comparable size and that with longer burning time.

The focusing of the LED beam is tight enough to meet the needs of cave divers. Until now, no LED lamp on the market has a tight enough focus for cave diving use. This focusing was achieved through a specially manufactured reflector. Until now it was normal for 50% of the available light not to be focused by the reflector/lens combination. This unfocused light spreads out to the sides and doesn't do the cave diver any good. A tightly focused efficient light beam is also advantageous for normal open water diving. Because of this the Heser-Backup is also used as a main light for open water diving.

A large reflector can more efficiently focus the LEDs output than a small reflector. Many LED lamp manufacturers use a smaller, less efficient reflector/lens unit, thereby saving money. We don't.

Since LEDs are shockresistant, and the LED junction emits light almost forever (50000 hours) these lamps are highly reliable.

The completly sealed LED unit keep on working also in a flooded housing. The LED unit is pressure-tight up to 20 bar.

The decision to eliminate controlling electronics provides the following advantages for use as a Backup light:

Electronics can get damaged by water or shock, and become unusable.

An electrically controlled LED is always using the maximum power that the circuit is designed for. The advantage is constant brightness until the batteries are completely discharged. The battery voltage drops during the discharge cycle, and the control electronics will compensate this drop by increasing current to the LED. Towards the end of the battery discharge cycle the current draw is at the highest level and the batteries rapidly die with little to no warning. Without control electronics the current draw drops along with the battery voltage. The disadvantage is the LED becomes dimmer as the voltage drops. The advantage is the burn time increases dramatically. This can be an enormous advantage for a diver who needs light since the burn time provided by the electronics is no longer working against him. Due to the elimination of control electronics the lamp is capable of delivering enough light for over 8 hours.

Due to the use of an LED and the elimination of electronic controls, the lamp is capable of providing sufficient light for 8 hours and longer (depending on the type of batteries you select).

On holiday you can use it as main light for night dives. Most times one battery set is enough for all night dives. You do not have to charge akkus during your holiday or maintain akkus until to the next holiday.

The outer housing are only two parts. There is only one sealing edge. More sealing edges would rise the rise of leaking.

The only opening is sealed with 2 O Rings, one behind the other. This reduces the possibility of a seal failure which can be caused by sediment deposited on the outside O Ring. If the outside O Ring seal leaks, the inner O Ring will still be sealing the opening.

Heat produced by the LED is returned to the batteries

The lamp body is turned from a solid rod. The axial channels and roughened middle section make the lamp easy to hold with wet hands and gloves. The rubber hood on the lamp head is also non-slip.

The lamp is switched on by simply turning the lamphead. This joins the reflector to the heat-conducting battery tube which completes the circuit and also conducts heat to the batteries.

No customer reviews for the moment. 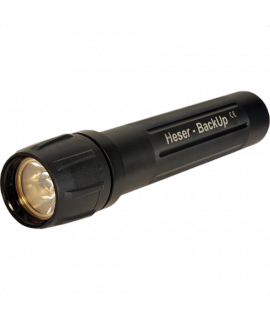 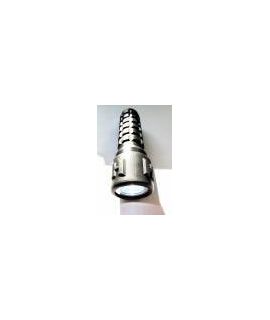 Heser Backup Typ 2 with your Name

175.63€ Tax excluded
Shipping excluded
Not in stock but normally available at short notice! 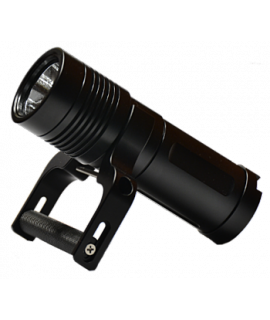 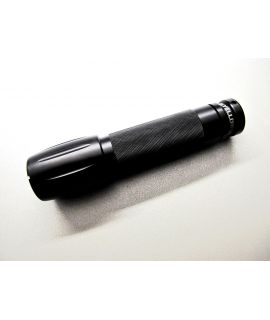 100.00€ Tax excluded
Shipping excluded
Not in stock but normally available at short notice!