This analyzer is intented primarily for use in checking the

correct mixing of nitrox (air enriched with oxygen) and trimix (a mixture of air, helium and oxygen). After connecting the analyzer to a bottle with a breathing mixture, the content of oxygen and helium is shown as percentages directly on the display.

The same type of standard electrochemical sensor normally used in analyzers for diving is used to determine the oxygen content. The helium content is determined on the basis of measuring the speed of sound in the analyzed mixture.

The speed of sound is measured directly as the time it takes for an acoustic impulse to travel between two microphones. This measurement is taken alternately in both directions so that it will be possible to eliminate the influence of the gas flow-rate.

Every analyzer produced is tesed in the complete range of acceptable oxygen and helium values. In addition to the testing of air, pure oxygen and pure helium undergo testing with 12 different calibration mixtures.

Calibration mixtures are gravimetrically mixed from pure basic gases and are exact to withing two decimal places. In addition to exactness, the accuracy of compensation for the influence of the flow-rate of the analyzed gas is also tested.

We deliver the analyser in the new version with Oled Display, together with the divesoft hose with a connector to the inflatorhose of your regulator. The flow is already adjusted.

The charger for the built-in battery can be ordered as an option, but you can also operate the device with a 9V battery. ( not included!) 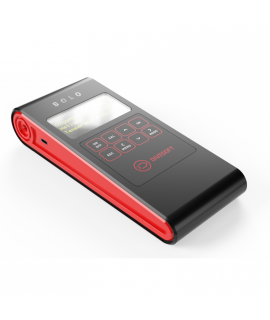 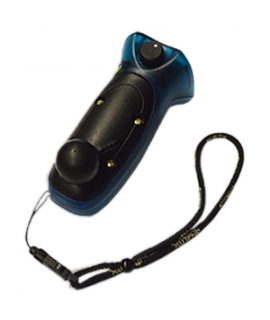